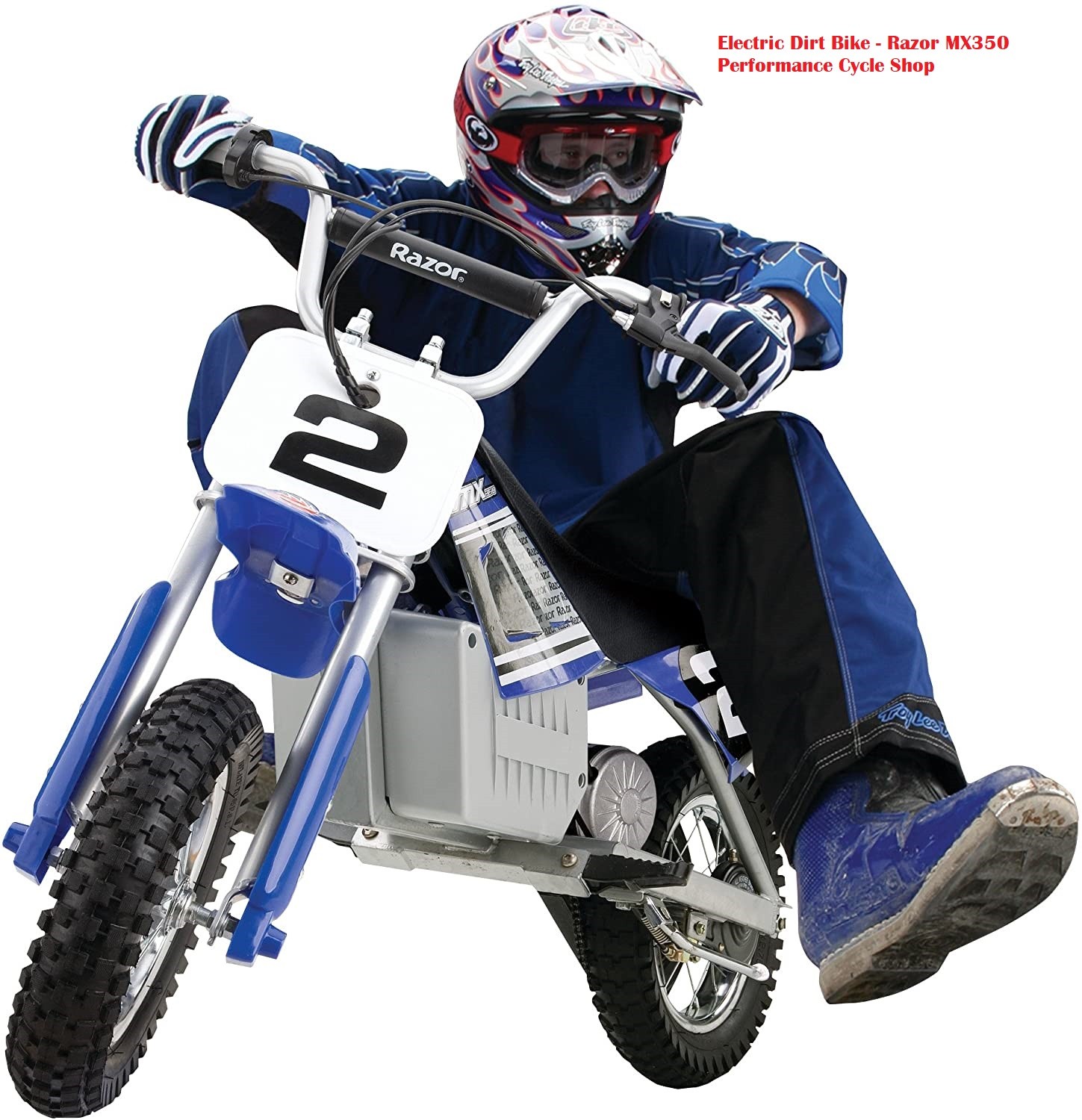 We may earn money or products from the companies mentioned in this post.

When it comes to electric bikes and scooters, Razor is a great brand, and the Electric Dirt Bike Razor MX350 is certainly up there with their best products. What we have here is a very tough little bike that’s comfortable and fun to ride, and actually goes quite fast for an electric bike, especially if the child is quite light.

A popular choice among kids between the age group of 5 to 12 years old, the Electric Dirt Bike Razor MX350 is an electric variant with a single-speed transmission that offers a realistic riding experience to kids out on the rugged tracks while they travel at speeds of 14 miles per hour.

The bike is easy to assemble straight out of the box, which means that if you buy this bike as a present for your kid, it won’t be long after they’ve opened it before they’ll be able to zoom off around the street having fun riding it. The only major bad thing we could find about this bike is that Razor no longer makes it with suspension.

These dirt bikes work on a gasoline-powered engine with more than one gear to ensure the maximum transfer of power from the motor to the single-chain drive system. With the Electric Dirt Bike Razor MX350, gas power is exchanged with electric power that gives it the advantage of being virtually soundless. The use of two 12V (24V) lead-acid batteries together to power the device means that there is at least half an hour’s worth of usage time without any sounds. The neighborhood will never know that a dirt bike is running on its sidewalks.

The two lead batteries together with the single-speed transmission deliver just 14 miles an hour maximum speed, which is ideal for young children with aspirations of hitting the dirt tracks one day. Speeds of 22 km per hour are safe enough for young children to experience the air flowing through their hair and perform a few dare devilish stunts without giving the parents a headache concerning their safety. Weighing just 70 pounds, the Electric Dirt Bike Razor MX350 is one of the lightest dirt bikes for kids that I have seen which is easier to handle than most even though it has a high torque engine.

True to its dirt bikes image, the Razor MX350 is built with large pneumatic 12-inch tires, a rear brake system, and a dual suspension system. The 12-inch wheels give it sufficient traction while the dual suspension system eases the ride out over the bumpiest of terrains without releasing control thanks to the rear brakes and the single throttle twist grip control. The simple correlation between the twist control of the throttle and the motor output makes it easier to handle the dirt bike.

Probably the most attractive feature of these dirt bikes is that they look just like the real dirt bikes used by pros to compete in extreme sports. The Electric Dirt Bike Razor MX350 outperforms any other type of battery-powered dirt bikes for kids with its looks. A downsized version of actual dirt bikes, the Electric Dirt Bike Razor MX350 has the looks to kill and the performance to make any kid go wild. With sufficient features and safety attributes, this dirt bike has got to be my personal favorite out of the many kids’ dirt bikes that I have reviewed in the past.

If there is one area where the bike has some issues is the battery pack that comes along with the Electric Dirt Bike Razor MX350. It boasts a lower run period as opposed to larger replica electric bikes at just 30 minutes to a full charge. However, I think that this is an added advantage as young children just cannot wander off all that far before the gas runs out.

Of the many products that I have personally reviewed in the dirt bikes segment, the Electric Dirt Bike Razor MX350 stands out for being the most affordable model with the best satisfaction quotient. Not only does it offer great speeds and a nice ride but it also has a long run time sufficient for keeping young kids excited each day. If there was one personal note of dissatisfaction with the Electric Dirt Bike Razor MX350 it would be that the newer models now do not come with the dual suspension and instead come with a single fork front suspension which does reduce the comfort level on uneven surfaces but does nothing to make it less sturdy. If anything, the use of a rigid frame with a steel front suspension has increased the sturdiness of the bike.

The bike is so easy to assemble that it takes just 10 minutes before one is ready to charge the device for its maiden usage. This in contrast to other dirt bikes of a similar nature is the biggest advantage of the Electric Dirt Bike Razor MX350. For those who want a long-lasting entertainment device, the Electric Dirt Bike Razor MX350 is a perfect choice as it is one of those kid’s playthings that will last a long time into the future. In fact, its 140-pound weight restriction is good enough to even accommodate older kids although, it is not advisable to do so.

have given it a good rating which is mostly because of its lightweight, long-lasting low-cost nature. I have to agree with this conclusion and have to go one step further in congratulating Razor for making dirt bikes for kids that are well built and loads of fun to have around.